The ultimate aim of the art of karate lies not in victory or defeat but in the perfection of the character of the individual.

The modern world in which we live is complicated and difficult to navigate, especially for our children. Young people today are besieged by messages of violence, greed, and consumerism at every turn. They are encouraged to conform and follow the false promise of pop culture rather than think critically and become leaders.

For parents, the influence of pop culture can be difficult to overcome. How do we teach our children respect for themselves and others? How do we instill self-confidence and self- determination? How do we give them the tools to become leaders?

For three decades Sonoma County Karate Master Marty Callahan, founder of The Shotokan Karate Leadership School, has been doing just that. With a firm but gentle hand, Marty has guided thousands of young people toward achieving excellence in their lives through Shotokan Karate.

As a young man, Marty attended seminary with the goal of becoming a priest. Later he changed paths and attended University of California Riverside, earning a B.A. in psychology.

“I feel what I do is similar to what a priest would do,” says Marty, with a smile. “I act as counselor, psychologist, trainer, and mentor to my students.”

Marty first began studying karate while in college. Having grown up in an abusive home, he was an angry young man interested in learning to fight. The longer he trained, however, the more his focus shifted from fighting to character building and leadership skills.

“Character development became the central focus of my training,” says Marty. “My teachers emphasized fighting, but I was more interested in becoming a better person. I realized that my anger was doing me more harm than good. Karate gave me the confidence to let go of it. I used to be a human ‘doing.’ I became a human ‘being.’ I was, and am, being transformed.”

Marty Callahan, Sensei and owner of Shotokan Leadership Institute presents a certificate of advancement to a student

“When I opened my school, I wanted to share what I had gotten from karate with other people, kids and adults,” says Marty. 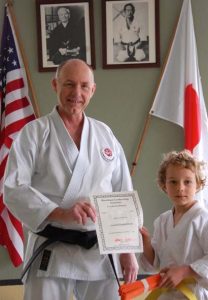 Children don’t just put on a karate uniform and learn to fight, they learn respect for themselves and others, and are shown the path to realizing the potential hero that resides in us all.

Together with like-minded board members (Shotokan Karate Leadership School is a non-profit organization under the auspices of Shotokan Leadership Institute), Marty has developed a unique and inspiring way to help kids find the potential hero that resides in them all. Knowing that children love stories, they wrote and published a short book that tells the epic story of a young boy named Tiger who suffers from a lack of self- confidence. He has seen other kids being bullied and tormented and it has left him feeling scared, angry and helpless and he wants to do something about it. Through Shotokan karate, Tiger embarks on a great journey encompassing 12 principles of leadership. Along the way he is forced to test himself, overcoming hurdles and

obstacles, each imparting more knowledge and wisdom, and each bringing him closer to becoming a hero.

At Shotokan Karate Leadership School, each student is given a copy of this book, and each undertakes his or her own personal journey to becoming a hero. A huge map depicting Tiger’s mythical world hangs on the wall of the school, allowing each student to track their progress as they follow Tiger’s path toward becoming a hero themselves.

“By taking martial arts training and turning it into a story,” says Marty, “each child can become personally invested in the quest. It captures their imaginations. Kids thrive on stories, games and play; this is a story of leadership and how to gain the qualities of a hero. The kids love becoming part of it. They love the idea of becoming heroes and gaining the respect of their friends and family, and most importantly, themselves.” He pauses, and adds, “Kids want to be heroes; we give them the opportunity to be the hero they were meant to be.”

The results speak for themselves. Over three decades Marty has personally guided over 8,000 students to self- confidence and leadership. According to Marty many have gone on to become doctors, lawyers, teachers, contractors, engineers—community leaders.

“Through our program they freed themselves from the self-imposed bonds that might have kept them from success,” says Marty. “We had a student once who was completely out of control, bouncing off the wall. His parents said he had ADHD and could not control his behavior. He wanted to be a hero, and after eighteen months of resisting the program he made the decision to change his behavior. He became a model student, helping others and demonstrating respect and leadership. We take kids who are so shy they won’t look you in the eye, and kids who are

highly aggressive, and we transform them.” 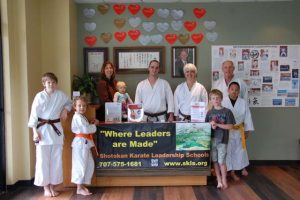 The Shotokan Karate Leadership School currently has five instructors and around 80 students, including children and adults. The program typically takes three to five years to complete, after which students have a new understanding of power and what it means to be a leader in their community, in addition to the confidence that comes from knowing they can defend themselves in a time of crisis. Ironically though, the karate skills learned at the school are intended to prevent fights. A sign outside reads: It’s not about fighting; it’s about not fighting.

Marty grins when he talks about watching his students’ attitudes transform as they move through their program. “I love seeing them go from being kids who are distracted and out of control to young people who are confident, respectful, clear thinking, focused, and compassionate,” he says. “It doesn’t get any better than that.”