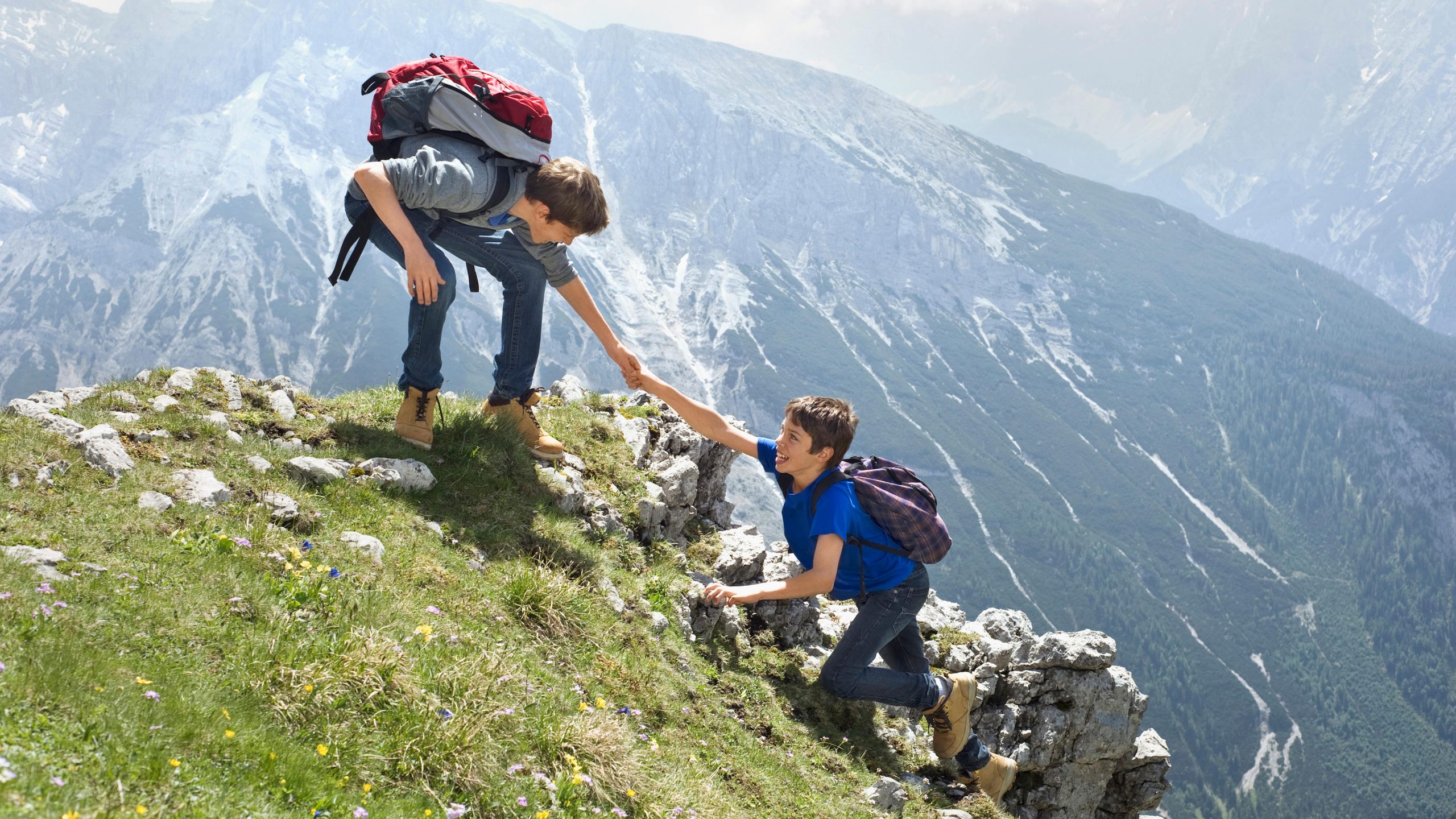 Tiger and Blake trudged on and on. They were getting very tired, as they had been
walking for many days. The road started to climb, and in front of them large, snow-capped peaks reached for the sky. They stopped to eat and look at the map. Blake told Tiger, “Those mountains are the Peaks of Trust. It looks like we have to go right through them to get to the Plains of Endeavor.”

Tiger looked up at the mountain peaks and thought about how difficult and dangerous
this journey was becoming. He knew he was tired, but he also knew that he must keep his mind on the goal. Not only will this help him, but it will also help Blake. Tiger felt responsible for Blake, and he didn’t want anything bad to happen to his friend and companion.

Tiger turned to Blake and said, “This will be hard, but we have everything we will need,
and if we work as a team and trust each other—we’ll make it!”

Feeling inspired, they finished eating, threw on their backpacks, and started up the steep
road. Before long it turned into a rocky trail. They continued on as the trail twisted and turned its way up to a barren ridge. They followed the ridge for about a mile, when they encountered snow. The wind began to blow hard and the going got treacherous as the snow became icy and slippery.

Blake and Tiger pulled the collars of their coats tighter in an effort to stay warm. Tiger heard a loud, rumbling sound and turned to Blake, who clearly heard it, too. Puzzled, they looked around but could not find the source of the noise. They kept on. When they reached the summit, they breathed deeply and began their descent down the opposite side. The snow began to disappear, and their heart rates slowed.

Blake suddenly stopped. In front of him the trail disappeared. It looked as though a recent
landslide had destroyed it. He said, “Tiger, this must have been the rumbling noise we heard.” Just then a large rock broke free from a ledge above them. It hit the trail about fifty feet in front of them and then went crashing down to the bottom of the cliff far below.

Tiger said, “Whoa! It looks like the landslide is not over.” They looked across the debris
left by the slide, which stretched out for several hundred feet. The trail then picked up on the other side, and it wound down to a small valley below them. But they couldn’t take a chance staying on the trail knowing that more rocks could come plunging down at any moment. They backed off and looked over the side of the trail down a drop of about a hundred feet. They seemed to have no choice. They couldn’t go forward across the slide, and they couldn’t go back without making a long detour.

Blake inspected the cliff more closely and got an idea. He pulled out a rope from his pack
and told Tiger his plan. “I can use this rope to lower myself down. My father showed me how to do it. We practiced a lot and I got pretty good at it. Once I’m down the cliff, you can tie one end of the rope around your waist, and I can slowly lower you to the bottom. When you’re down I can pull the rope from around the tree and get it down.”

Tiger looked at Blake and then stared at the cliff. He was scared and not sure of the plan.
Blake said, “Tiger. I know how to do this. My father taught me well. I won’t let anything happen to you. I can show you what you have to do and then talk you through it when I’m down below. It’s easier than going up!” he joked.

Tiger inhaled deeply and looked at his friend. “Okay, Blake. I trust you. You’re my friend, and I know you want to help.”

Blake took a short piece of rope, tied it around Tiger’s waist into a sitting harness, and
showed him how to tie the end of the long rope to it. Blake threw one end of the rope over the cliff, walked around a nearby pine tree, and then threw the other end down. He looked again at Tiger and asked him if he had any questions. Tiger shook his head no.

Blake made his own harness and then grabbed hold of the rope and prepared to go over
the side. He put both feet on the edge, leaned back, and began rappelling down the cliff step by step, supported by the rope. After a couple of minutes, Blake reached the bottom and yelled up, “Okay Tiger, it’s your turn!”

Tiger yelled down to Blake, “I’m ready! Take up the slack!” Blake took up the slack and
signaled that he was prepared.

Tiger walked towards the ledge and began to feel nervous. He could see Blake far below,
and he was reminded of how confident Blake was about descending the cliff, and how patient he was with him in describing what to do. He trusted Blake. Tiger knew that he was afraid, but he remembered Sensei explaining how an empty mind is needed in life-threatening situations. Tiger took a deep breath and emptied his mind. He noticed a large black bird drifting on the air currents far above. He heard the water from a small stream trickling. He focused on the here and now. Obstacles are things a person sees, when he takes his eyes off his goal, thought Tiger. Wow, where did that thought come from he wondered.

Tiger’s heart started to calm, and his breathing slowed. He saw only the rope and the
cliff. His fear left him, and he told Blake that he was coming down. He stepped over the ledge, feeling the tension of the rope around his waist. He kept his feet in front of him, putting one foot below the other, using them to keep his balance as he slowly lowered himself down the rock wall. Before he knew it, Tiger found himself standing at the bottom next to Blake. And now that he was down, he felt great.

Blake congratulated him on keeping his cool, and Tiger thanked Blake for his help in
getting down. Blake untied Tiger and then grabbed one end of the rope and pulled it down from around the tree. They packed up the rope, turned around, and saw the trail pick up a few yards away. As they started hiking again, Tiger realized that the trust he had in Blake had grown enormously.

“Blake, you taught me what it means to trust. I put my life in your hands and you came
through for me. If you had messed up, I could have been seriously hurt or even died. From now on if anyone asks, I’ll tell them that you’re someone they can trust with their life.”

Blake stopped and looked straight at Tiger. He held his gaze for a long moment and then
said simply, “Thanks, Tiger. I feel the same way about you.”

As they started off, the trail wound around and down the mountain. After a couple of
hours, it entered a pretty green meadow with a small creek flowing through. They saw a nice
campsite beside the creek and decided to rest there for the night. After setting up camp and
eating a humble dinner, Tiger remembered the map. When he pulled it out, he saw that the word TRUST had appeared. Alongside it was an image of two people sparring; both of the
combatants’ fists stopped short of the other person’s throat without making contact.

Tiger’s mother knocked on his door and said, “It’s time for lights out!” As she came into
his room and walked over to his bed, Tiger yawned and closed the Book of the Empty Mind. His mom tucked him under the covers and kissed him goodnight. Tiger smiled and said, “I love you.”