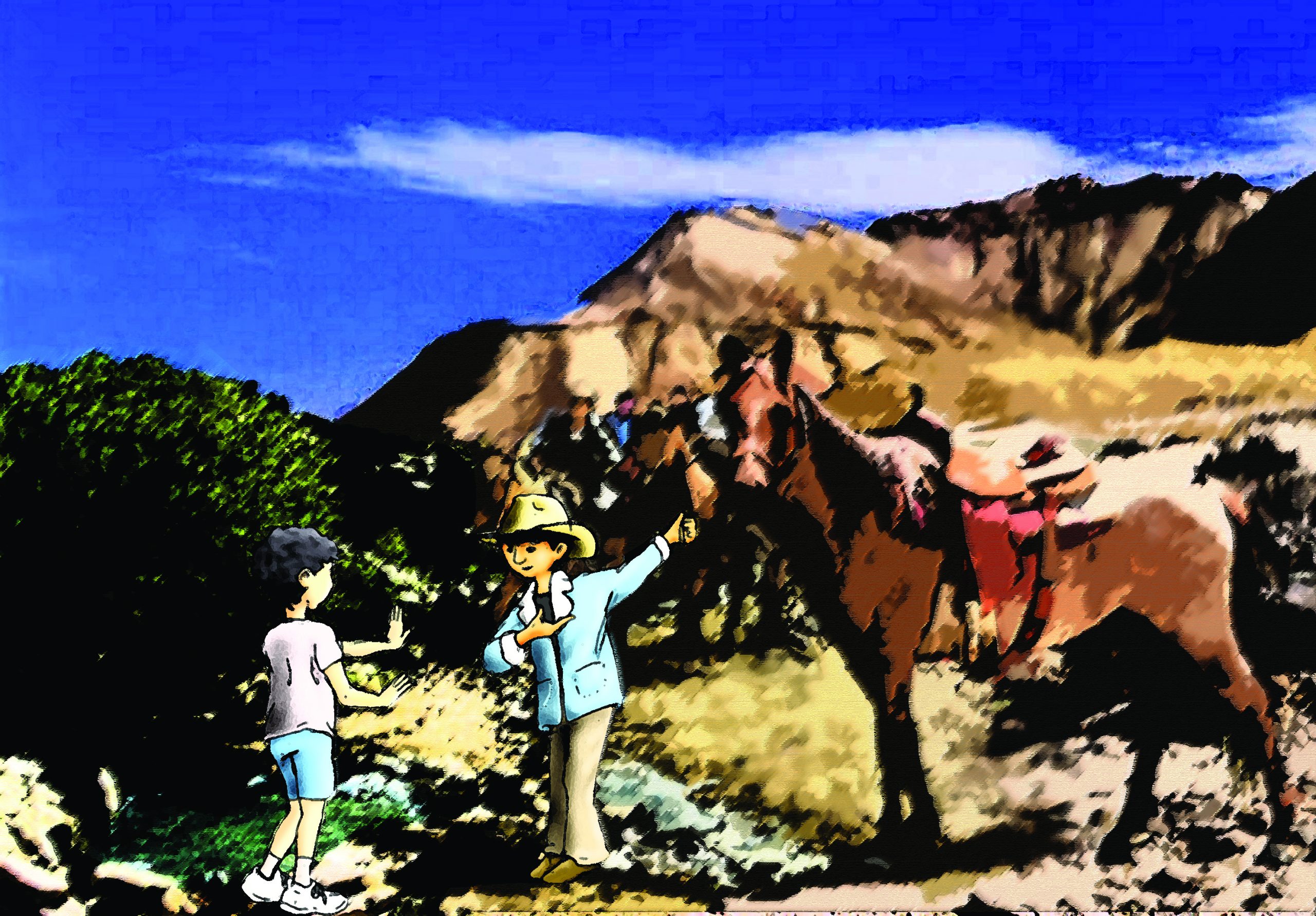 As Tiger and Blake continued their journey, the landscape became barren. Tiger tried to
remember the last time he’d seen a tree or flowing water. His journey with Blake had taken them into a vast stretch of desert with red rock canyons and a sea of sand. The walking was difficult, but each day Tiger felt himself grow stronger and more aware of the beauty of life. He’d thought of a desert as a dead and desolate place, yet as they walked and talked he was fascinated by the colors and textures of the rock, the deep blues in the sky, and the variety of hardy plants and animals that lived in this harsh environment

One morning, Tiger awoke early and decided that, while Blake slept, he would walk the
hundred or so yards to the small ravine where yesterday they had found a pool of fresh water fed by a spring. The sand crunched beneath his feet as he walked. He wondered what the new day would bring. He reached the clear pool of water and kneeled to take a drink. Then he splashed water into a bowl-shaped depression in the rock and used it to wash his face. He stretched out on a great, flat rock and enjoyed the feeling of the rising sun drying and warming his skin and the stone.

A sound startled him—the clatter of approaching hooves. He jumped to his feet and
focused his eyes on a cluster of six or seven horses, each mounted by a boy not much older than him.

“Well, hello!” the rider in the lead shouted as he dismounted. “What brings you to this
one friendly place in an uninviting desert?” He let his horse drink eagerly from the pool.

Tiger sensed that something wasn’t quite right with these boys. They were too well
dressed and riding horses that they didn’t seem to know. “I am on a journey with my friend,” he said. “We camped near here last night.” Tiger wanted to give them as little information as possible.

“What is your name?” asked a boy who wore fine, tall boots and thick gold necklace.

The boy who was apparently the leader answered, “I’m Raven. We’re going to have some
breakfast; would you like some?” The boys removed from their saddlebags fresh bread and fruit and some fancy cheeses.

Tiger thanked them for their hospitality, but declined their offer of food.

They’d eaten and chatted only a few moments when Raven said to Tiger, “You should
join us. We will get you a fine horse.”

The invitation surprised Tiger. Join these boys? He didn’t even know them. He said to
Raven, “You’re saying you would buy me a horse?”

The boys exploded into laughter. Tiger couldn’t imagine why they found the question so
funny.

Raven caught his breath and said, “We don’t buy horses, my friend. We steal them. A few
days ago we passed by a ranch with a couple of beauties. We’ll give you a ride there, and you can take your pick.”

Tiger looked at them serenely. Now he understood what wasn’t right about these boys.

“Truly, you steal horses?” he asked.

“We take whatever we need from a town or ranch, and then we ride on,” said Raven.
“Sometimes we split up into pairs and ride up to a home and tell the people we’re orphans or runaways and we’re hungry. The people always invite us in, feed us, and give us a place to sleep. We get up in the middle of the night, take whatever money and valuables we can find, and ride off.”

A second boy pulled something out of a pants pocket. He said, “Look at this gold watch I
stole from a trusting old fellow just the other night!”

Tiger shook his head. “You lie to people and steal from them?” he said. “How does that
make you feel about yourselves?”

Raven shrugged and said, “Hey, it doesn’t bother me a bit. We only take from rich people. My belly’s full, and there’s money in my pocket. And there are a lot of people who do
what we do, and worse!”

Tiger rose to his feet. “Well, that’s not for me,” he said, and turned to walk back to his
campsite.

He found Blake awake and ready to resume their journey. “I was beginning to worry
about you, Tiger.” Blake said. “Where did you go?”

“I went for water, and I ran into some thieves. I learned something important from them.”

“I learned the meaning of integrity. I learned that I could ride if I would do what I know
is wrong, but I would rather walk and stay true to myself.”

Changing the subject, Tiger suggested that they look at the map. As he carefully opened
it, an image of two hands shaking with the word INTEGRITY began to appear.

Blake looked and said, “Tiger, this map is going to show you the way to the temple and
record the leadership traits you gain along the way.”

“I believe you’re right, Blake. It’s very special. Well, let’s get out of here, because those
boys may decide that letting me walk away was not a good idea.”

And with that, Tiger and Blake packed their belongings and moved out, leaving no trace
that they had spent the night.