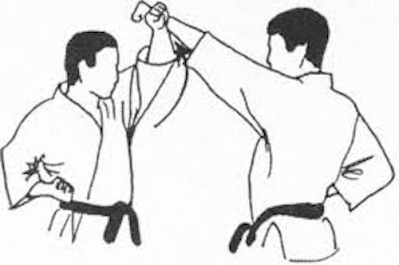 Charlie had recently passed his Assistant School Leader III exam and was beginning to learn about semi-free sparring. Tiger was helping him and explaining to him that he needed to show that he could catch his opponent in one step, block and counter in one breath, and
recognize and take advantage of openings. But Charlie wasn’t getting it, and he was becoming more and more frustrated with the lesson Tiger was teaching him.

“Charlie, you’re not doing this right. You’re chasing after me.”

It looked as though the more Tiger talked, the less Charlie understood.

Sensei saw what was happening and walked over to the two boys observing them as they
continued.

Charlie said, “I’m trying to do it, but it’s not working. When I attack I can’t get to my target before you have blocked and countered. I don’t think I’m ever going to get this!”

“Well it’s obvious that you haven’t practiced, and you just need to try harder,” said Tiger.

At this point, Sensei decided it was time to step in.

“Tiger,” he said, “an important Black Belt Shoka Leadership Trait is Compassion. Do you know what that means?”

“Well, compassion means to feel the pain of others and to be willing to work to alleviate
that pain.”

Sensei looked at Tiger and saw it was clear that he did not quite understand, so he continued, “A Black Belt Shoka Leader must help those he leads learn to do what he needs them to do. A Black Belt Shoka Leader must be a teacher and an instructor. So to teach Charlie, you must be able to feel what he’s feeling. Charlie is new to semi-free sparring; he only recently was promoted to the Assistant School Leader III rank.

“The proper approach is to push your partner to achieve as much as he can, while
exercising control, awareness, and good judgment. You must feel at what level he is, and adapt your leadership style to help him become more confident and competent. You have to point out to him his mistakes, but you have to also show him the correct way to do it. If you focus only on the negative, you will get negative results.”

Sensei saw Tiger’s eyes begin to light up. Tiger said, “So what you’re saying is that a Black Belt Shoka Leader must feel compassion towards the people he leads and use that compassion to help them be the best they can be?”

Sensei nodded, “Yes, Tiger, and this does not just apply to semi-free sparring, but to all
interactions a leader will have with their followers. If a teacher does not have compassion for his students, he would not understand how to get them to give a one-hundred percent effort. Or, to look at it another way, if I do not show compassion to you in your journey, you will not show compassion to students who you are helping on their journey.”

Tiger was warming to this idea of compassion. “I think I’m starting to understand, Sensei.
Compassion isn’t just here at the dojo; it’s everywhere. It’s helping my sister when she falls and hurts herself, or offering to carry the groceries for Ms. Jenkins next door, or my mom helping me when I’m stuck on my school work.”

Charlie spoke next, “So, Sensei, does this mean that if I have compassion for my opponent it will give me an edge in sparring, because it would allow me to understand how he feels and use that to find an opening?”

“Yes, Charlie, that’s right. If you can feel what your opponent feels, you can anticipate his intentions and take advantage of them. This is the mental opening we talk about. Distraction, boredom, and feeling what our opponent feels are all opportunities to be exploited. The empty mind can receive and react as necessary, because it is not already committed.”

“Now let me watch the two of you do semi-free sparring,” Sensei said.

The boys bowed and began to spar.

Later that night, after finishing his homework and getting ready for bed, Tiger pulled out
the Book of the Empty Mind as he had done many times before and began to dream.

Marty Callahan has spent his life understanding and improving the lives of students both young and old. His passion led to the founding of Shotokan Karate Leadership School in Santa Rosa, CA in 1981 with a dream to awaken the extraordinary leader in his students. Having inspired, taught, coached, supported and trained over 15,000 students in over 40,000 classes in Santa Rosa, Marty has become Sonoma County’s preeminent martial arts leadership instructor. His students, hundreds of whom have gone on to become leaders in their chosen fields, appreciate his engaging, student centered approach to teaching and they believe you will, too.