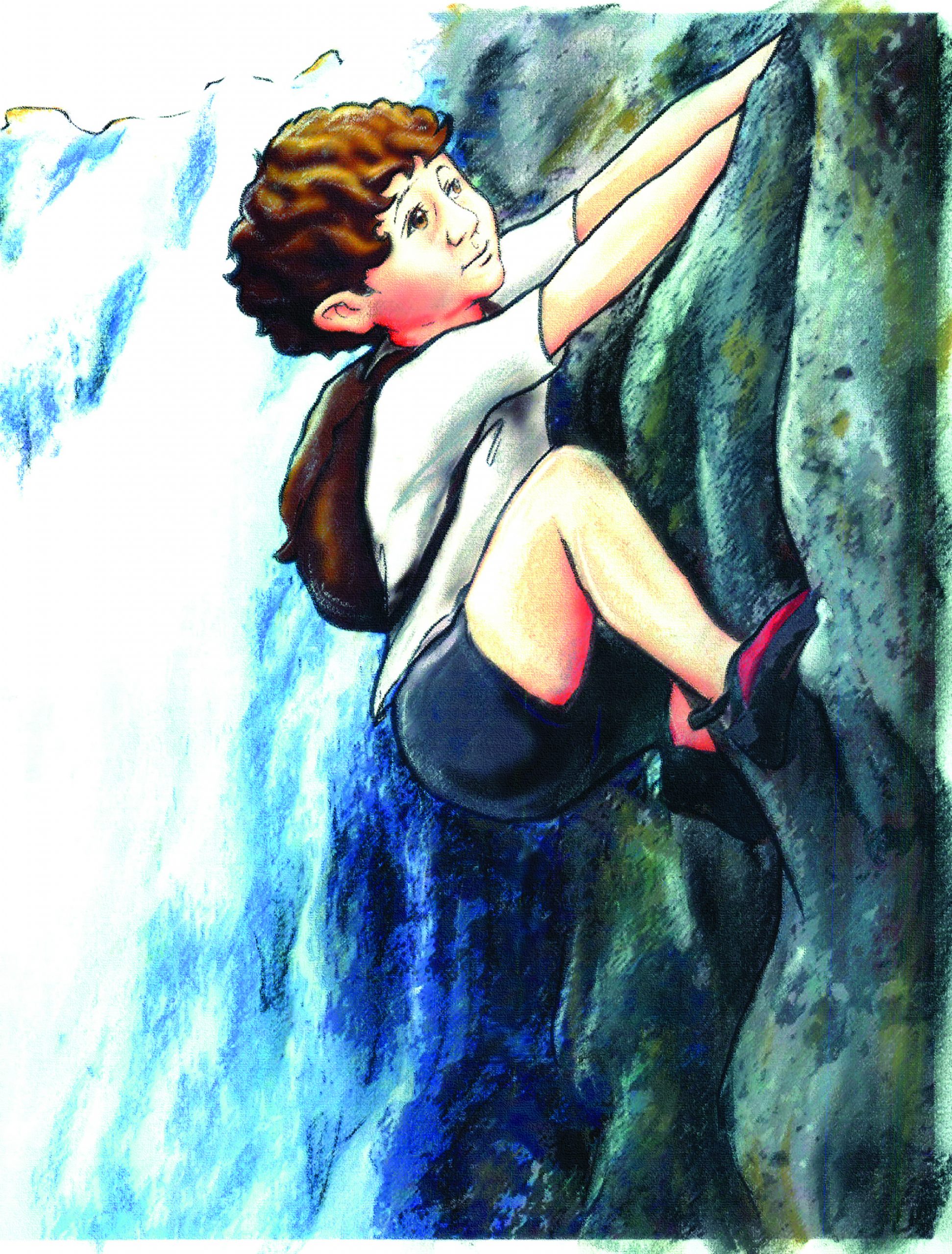 A bald eagle cried and swooped low over the fast-running river and snatched an
unsuspecting fish in its talons. Tiger and Blake watched the spectacle from a walking path
alongside the river. Tiger looked far into the distance and saw the river’s source, the Great
Ryoku Mountain shrouded in jungle, its summit piercing the clouds. A part of him didn’t want to take this journey; that part wanted to turn and run back to his safe and comfortable home. But he was powerfully drawn to the challenge of following in the footsteps of the great man who had given him the Book of the Empty Mind.

His journey was going to take him to the temple at the very top of Ryoku Mountain—the
Temple of the Clouds. And Blake, his childhood friend, would accompany him along the way. This was not Blake’s great journey; it was Tiger’s Great Journey. Blake wanted to have
adventures, but this experience did not hold a special significance to him. However to Tiger, this adventure had become more important than anything he had ever done in his entire life. It had become the center of his life.

Tiger listened to the rushing of the water and scanned a mountain whose perils he could
only imagine. He did not know if he had the strength, desire, and self-control he would need to conquer all the obstacles between him and the peak. But he did know he wanted to test himself and to become stronger. He had heard of people—some his age, a few younger, many older who had worked hard and made it to the top of the mountain. These people wore a black belt and were quick, strong, wise, and greatly respected. It was a dream of Tiger to be one of them. And though he had some fear, he trusted what Sensei had told him, as he had counseled many others on this same climb.

“Are you ready?” asked Tiger.

Tiger loved Blake like a brother. Their families had lived in the same neighborhood since
before either of them was born, and their moms were best friends. Tiger and Blake had lived
their whole lives together, and they got along like two peas in a pod. Something in the back of Tiger’s mind told him that he would need Blake along the way.

The two of them set out along the river toward Ryoku Mountain. Tiger remembered that
Sensei had instructed him to empty his mind prior to any setting out. He had told the boy to let go of thoughts about home or school and to simply be aware of all that was happening around him. In this case, Tiger let his thoughts go and became aware of the sound of the pathway soil crunching beneath his feet, the touch of sunlight on his skin, and the sense that his legs and lungs were working harder as the trail grew steeper.

A gnat buzzed, and Tiger brushed it away before it could fly into his ear.

Soon, the boys became aware that the mountain rose sharply to their right, as they entered
a river canyon. The walking path grew more narrow, steep, and bumpy, and then it just ended. The raging river was to the left and to their right, steep and craggy cliffs. Tiger was confused. Were they lost? Should they turn back? He looked up at the cliffs and asked himself if he really wanted to do this. But he knew that if he hoped to make it to the top of the mountain that the two of them would have to climb these cliffs, which were as high as the tallest building he had ever
seen. Tiger remembered how much he loved to have his turn on a climbing wall at a birthday party. But that wall wasn’t nearly this high, and it had handles and a safety rope. This cliff was something to behold.

“Our fears can be our greatest obstacles,” Tiger remembered Sensei telling him. “If you
want to make it to the top of a mountain, you have to face your fears. You will have to change yourself. You will have to become someone greater than who you are right now. Let your fears stimulate you to change, and let your heart guide this change. Free your mind of doubts, and focus your attention on doing what you need to do.”

Tiger took a deep breath. He heard the eagle cry again and nodded at the thought that he,
too, had a spirit that wanted to soar. “Let’s climb,” he told Blake.

With that, Tiger looked up at the rock wall and scanned it with his mind’s eye, a tactic
that the Old Man and Sensei had taught him. Then he saw it, a series of hand- and footholds that stretched from the bottom of the cliff all the way to the top. ’Holds’ that were invisible when his mind was filled with doubt, but perfectly clear now that his mind was cleared of doubt. What a realization this was! In an instant Tiger saw how so many of the problems that exist in the world exist because of the fear and doubt that are in people’s minds.

Tiger reached up with his right hand and took hold of a small crevice. Then his left hand
clenched onto a small outcropping. He lifted his right foot onto a tiny ledge and pulled himself up. In what seemed like mere seconds, Tiger was ten feet up the cliff with Blake close behind him.

Now that all of his attention was focused on the cliff, Tiger could see all the cracks,
ledges, bumps, and other places to grip and stand on. It wasn’t a smooth wall of rock any more, but a series of grips and footholds leading straight up.

And Blake was climbing it like a pro, too!

Tiger was enjoying this immensely. From crevice to outcropping to ledge to foothold,
Tiger moved smoothly and effortlessly up the cliff. He made sure his grips were solid and his toes secure, then pulled himself up again, and again. Every bit of his being was focused on his fingers and toes, and on the places on this cliff that they could grip. His muscles strained, and a bead of sweat trickled down his back.

Tiger was about halfway up, when he placed his hand in a ledge and, in so doing, pushed
a rock back deeper into the crevice, revealing a leather pouch. He reached in and pulled it out and then shouted down to Blake, “Guess what I found?”

“What?” called Blake, who was busy making sure he didn’t slip.

Tiger tucked it into his shirt and continued upward to the cliff’s ledge.

After another twenty minutes of climbing, Tiger reached the top and a minute later Blake
scrambled over the top as well.

“We did it!” they shouted and jumped with joy.

Then they turned and gazed down at the great cliff they had just climbed and the churning
river at the base. “This took courage,” Tiger said. “We were strong in the face of danger, and we showed the most courage—not when we finished, but when we started.”

“I feel confident,” said Blake, “and I know that it’s because I’m now sure of my climbing
skills.”

“Me, too,” said Tiger. “Now I know what Sensei meant when he said that confidence is
having the belief that you can do something.”

Both boys stood in amazement at what they had learned and how they had changed just
by accepting this one challenge. Then Tiger felt something in his shirt and remembered that he had tucked the pouch in it. “The pouch,” he said as he pulled it out. “There’s something in it.”

Blake became curious and walked over. “What is it?”

“It’s a parchment of some kind.”

After studying the ancient map for a few moments, Tiger said, “There’s a trail leading to
the top of a mountain, and there’s a temple at the top. Let me see if I can make out the name.” He drew the map a little closer. He squinted hard and after a while he was able to make out faded letters that spelled. . .

“It says Great Journey to Ryoku Mountain and Temple of the Clouds. The temple is at
the top of the map; the trail seems to start at the bottom left and winds around to the temple. Wow, look, Blake!”

As Tiger and Blake watched, an image of a child standing facing a big man appeared on
the map and under it the word COURAGE was written.

“Can you believe that? That’s what we were just talking about—courage, and now it
appears on this map. This is more than a coincidence, Blake. It’s a sign.”

Tiger thought for a moment. He couldn’t help but think that this had something to do
with the Book of the Empty Mind and his journey to become a Black Belt Shoka Leader. It was no coincidence that he had met the familiar Old Man on the beach, who had given him that book and told him about the mysteries he would encounter on his journey. This must be one of them.

“I don’t know, but it must have something to do with my journey to become a Black Belt
Shoka Leader.”

They looked at the parchment again. Then Tiger folded it carefully, placed it in the
leather pouch, and tucked it inside his knapsack for safe-keeping.

They then turned and continued on the path leading to their next adventure and the
challenges that would come with it.

Marty Callahan has spent his life understanding and improving the lives of students both young and old. His passion led to the founding of Shotokan Karate Leadership School in Santa Rosa, CA in 1981 with a dream to awaken the extraordinary leader in his students. Having inspired, taught, coached, supported, and trained over 15,000 students in 40,000 classes in Santa Rosa, Marty has become Sonoma County’s preeminent martial arts leadership instructor. His students, hundreds of whom have gone on to become leaders in their chosen fields, appreciate his engaging, student centered approach to teaching and they believe you will too.