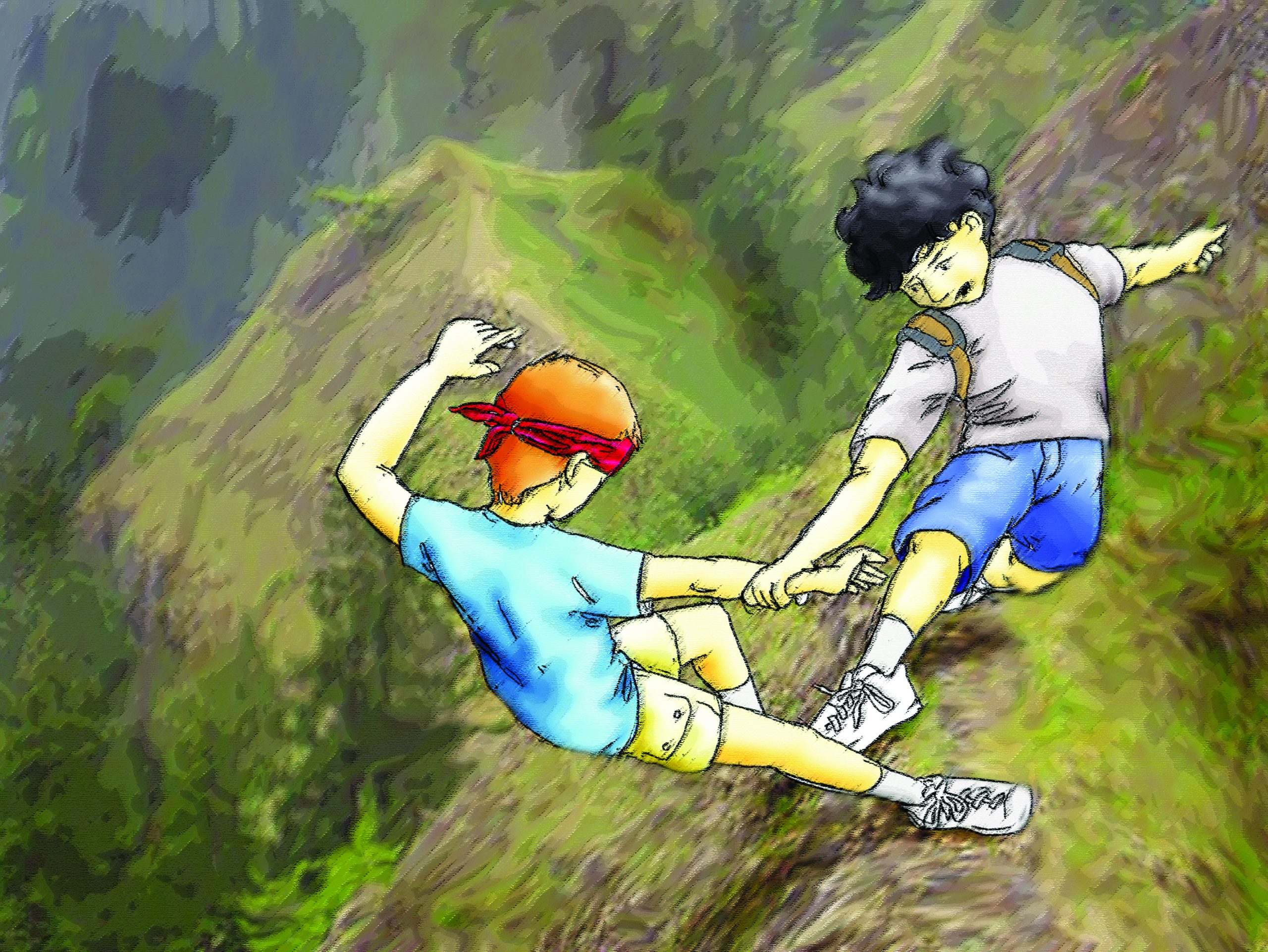 An Adventure Story for Youth Who Want to Change the World

Their great journey across the desert grew steep and cold. Tiger saw that he and Blake
were climbing the shoulder of a mountain chain. Soon the climbing required that they lean
forward and grab hold of the rocks to pull themselves up, while also pushing off with the toes of their shoes.

As Tiger finally hoisted himself onto the peak, he saw spread out before him a great
ridge—like a spine that appeared to run for miles. He and Blake set out carefully along it as if they were walking on a tightrope. Tiger didn’t like thinking what would happen if he lost his footing and fell to either side.

“How long will we be on this ridge?” Blake asked. Tiger paused and thought about what
Sensei had told him.

“I don’t know. I couldn’t tell from the map, but long enough for us to learn the lesson
we’re here to learn. And when we finish, we’ll be wiser and stronger.”

Tiger looked at Blake while trying not to pay attention to the beads of sweat he felt
running down his back, despite the cool mountain air. The challenge to move safely along this razor-like ridge had his heart pounding like an angry drum.

“Can you do this?” Tiger asked Blake.

“Of course,” Blake replied with a tone that sounded almost too confident.

“Good,” said Tiger as he imagined Sensei telling him to think of nothing but the ridge
and how his body felt as he proceeded step-by-step across it

Holding his arms out to his sides for balance, Tiger placed a foot onto the mountain’s
rocky spine. A mild gust of wind caused him to tense his muscles. He saw that all along the ridge ahead were patches of slick moss, loose stones, and other hazards, so he had to be careful with every step. He imagined asking Sensei how to make his way over the ridge safely. In the picture in his mind, Sensei told him to breathe evenly. “Keep your body low and feel your foot plant firmly on the mountain.”

Tiger paced himself, but it seemed like Blake wanted to race. Tiger stopped for a moment
to look out over the mountain. When he looked to his left, Blake passed him quickly on the right.

There was something about the way Blake did that that made him worry, but for the time
being he said nothing.

As they went on, Tiger became self-assured and began moving faster. “I’ve got it now,
Blake!” he shouted.

When he heard this, Blake stopped and said, “Let’s blindfold ourselves. I’ll go first.”

The tone in Blake’s voice bothered Tiger a little. It sounded challenging, and it worried
Tiger that Blake might be getting a little cocky, and that was not a good thing up on this ridge.

“Are you sure you want to do that?”

“What, you don’t think I can?” asked Blake defensively.

“It’s not that, Blake. I’m just not sure that we should be taking chances like that. There’s
a long slide down both sides of this ridge, and if we aren’t careful, we could fall and be seriously hurt. Why take the chance?”

“We need to challenge ourselves, Tiger.”

Tiger agreed that Sensei would tell them to challenge themselves, but he didn’t think it
was a good idea to do that now. It seemed that Blake was going to blindfold himself whether
Tiger liked it or not. He had already reached into his pack and pulled out a handkerchief and was tying it around his head.

“Look, Blake, if you’re going to do this, then let’s tie ourselves together.”

But Blake blew that idea off. “Come on, Tiger. Show a little backbone. We don’t need to
tie ourselves together,” Blake said with a tone of defiance. And with that, he pulled the
handkerchief down over his eyes, turned, and took off at a fast clip.

Tiger had no choice but to stay close to Blake. If he was close to him and Blake lost his
footing, maybe he could help.

Blake was well-coordinated and athletic, so being blindfolded didn’t seem to slow him
down in the least. He picked up speed and began to run across the mountain’s spine. Physically, Tiger was his equal. But Tiger had something Blake lacked: the common sense to know that this was a dangerous situation, and it was not the time to play around.

Suddenly, a rock slipped beneath Blake’s left foot. As he lost his balance and started to
fall, Blake screamed. He felt a hand grab his collar and yank him upward. Tiger pulled him back to the safety of the ridge.

Blake took off the blindfold, sat down, and looked at Tiger. “Whoa, thanks, Tiger,” he said rather sheepishly. “I thought I was a goner!”

“I just stepped on a loose rock.”

“No, what really happened?” When Blake didn’t answer, Tiger said, “I think you got
cocky.”

Tiger recognized that this was an important acknowledgement for his friend to make, but
wondered if he would act on it.

“You put both of us in danger by acting that way, Blake. I need you to not do that again.
Will you promise me that?”

“I will hold you accountable, Blake. That’s what friends do for each other.”

“Thanks, Tiger. This was an important lesson for me in humility. I got cocky and started
thinking that I was on top of the world and that no harm could come to me.”

Tiger remembered one of Sensei’s lessons about humility. He said humility is a balance
between bragging that you’re that better than everybody and going around feeling like you’re no good at all.

“Sensei told us, Blake, that humility is knowing what you are good at, without boasting
about it, and not being afraid to accept help when you need it. I think you became skilled at
moving across this ridge, but you weren’t yet good enough to go as fast as you were going,
especially when you were blindfolded. And you would have been safer if you’d accepted my
suggestion that I tie a rope to you.”

Blake nodded with tears in his eyes. “I’d like to try again,” he told Tiger. “I know I can
find my way across this ridge blindfolded, but I need to go slower. And I would like to have a safety rope tied to me.”

Tiger felt that his friend had gotten the message and would change his approach.

Blake stood up, and Tiger helped him secure a rope around his waist. Then Blake tied the
blindfold around his eyes and took a step. No longer trying to impress Tiger with his bravery, he focused more on his breathing and on making sure that each foot was planted safely before taking another step.

Blake began to feel more confident, but he was careful not to pick up more speed than he
could handle. Soon he realized that his breathing was strong and centered low in his body. He loved the feeling of moving briskly along the spine of the great mountain.

“Hold up,” Tiger said softly, so as not to startle him.

“Nothing; take off the blindfold.”

Blake lifted the handkerchief and saw that they were within a few feet of the end of the
great, long ridge. He saw the meandering path that would take them down other adventures—and other challenges.

“You did well,” Tiger said, helping his friend to remove the safety rope.

“Thanks,” Blake replied. “But I couldn’t have done it without you, and a little humility.”

“Let’s check the map again,” Tiger said as he pulled it from his pack. Sure enough, an
image of a figure in seiza appeared on it with the word HUMILITY.

The two boys looked at each other for a moment, amazed at what was happening, but not
surprised given what they had already seen.